My Thoughts on Gluten and Why I avoid It When Possible

I always thought gluten-free hippies were crazy until I learned that I was one of them. I have been gluten sensitive for many years without knowing it.  Within about 15 minutes of eating a vital wheat gluten item like a plant-based meat, my GI track gets inflamed for 3-4 hours and sometimes the effects will last as long as a day. I also sometimes will feel semi intense pain in my mid-back where my scoliosis is the worst and other joint areas of the body.

I discovered my gluten sensitivity in the summer of 2015 on the day of Spokane VegFest. In the beginning I decided I needed to refocus my life and one of the components was change my eating habits. Starting July 6th I began to eat a 32oz green smoothie every morning and I have not missed a single day since that day 8 months ago. I simply started eating much more clean and was eating close to raw most days. On the day of VegFest I enjoyed one of Field Roasts Hand Formed Burgers. I had been up since 4am and all I had eaten was 1/2 of my morning smoothie so in the afternoon I was famished and I devoured the burger. They are so crazy good but I realized about 15 minutes later that I had slight pressure and discomfort in my stomach. I had not felt this in the previous month. A few days later I ate 2 of the hand formed burgers at the same time while camping and that time had close to severe discomfort. I have since then been much more gluten cautious.

I really though gluten free people were just making up their reactions because it seemed to be the latest of countless fad diets that have plagued America. Because veganism and the gluten free movement seemed to hit center stage simultaneously it is very common for people in restaurants and in life to mix the two up. This was another reason I was so adamantly against being gluten free because I was so tired of people saying “I think there are some of those glutens in the bread” when I asked if they offered any vegan options.  I now remember as far as I can remember I would get slight discomfort after eating PBJs. Because I went veggie at 12 I ate A LOT of BPJs though middle school, high school and college. I always thought it was normal and that it may be the peanut butter. I never thought it would be the bread.

Effects on my body

My body responds to gluten in 2 main ways. The first is mild to severe pain in my GI tract. This is very noticeable and I experienced it as long as I can remember. The biggest thing that I notice when I do not eat gluten based foods is the lack of gas in the body. It just is gone. That is one of the nicest features of a gluten free vegan diet.

The second was even more surprising. Because gluten increases the inflammatory response in the body this occurs in more places than just the stomach. An example is that I a few days ago I ate at my monthly INVeg Potluck and  I realized I had almost no reaction in my stomach. I must have eaten really a good mix of foods which helped the body digest the gluten but the same did not happen for the rest of my body. My neck, and upper middle back were inflamed for the entire night and into the next day. 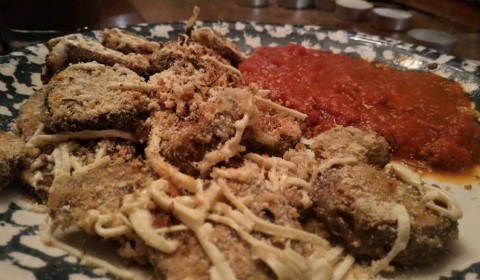 Abstaining: Well that does not sound like much fun but being that gluten is only so common because of how heavily it is put in processed foods and while being heavily subsidized by the US government and also equally advertised to the masses. If you take time to think about it there are lots of foods which do not contain this harmful component. I recommend looking at your foods and finding good recipe replacements. Here are a few blogs with great recommendations:

Digestive Enzymes: These small little pills can actually provide incredible support for people who have gluten sensitivities. Whenever I decide to go to my favorite Vegan Pizzeria,  Allie’s Vegan Pizzeria, I will take 1-2 of these little miracles and my effects will be greatly diminished. I have found this one, Zenwise Labs Vegan Digestive Enzymes With Probiotics

, on Amazon works well and is very economical. You can research more and find one you like. If you are also working on reforming the shape of your body, digestive enzymes are highly recommended because they will get the maximum absorption of the food that you do intake and help your body process anything that is not needed instead of storing it.

Gluten-Free Products – Nearly every conceivable item including pasta and breads are readily available in gluten-free forms. Yes sometimes they are slightly more expensive, I do believe that you can find good low cost alternatives most of the time. I would recommend looking in the normal sections instead of the over priced gluten free section.

While I do not consider myself gluten-free I do really listen to my body and I avoid it when possible. I do know that if I go to a doughnut shop for vegan maple bars that I will pay for it by being uncomfortable for a few hours. Most of the time that knowledge overrules my taste buds. I have almost completely replaced all gluten based pasta with gluten-free varieties because it really does not cost any more most of the time. I regularly find at the standard grocery store gluten free pasta for $1.50-$2/box on sale which is on par with most other wheat based pastas. I also regularly go to Grocery Outlet, a west coast supermarket that sells overstocked food items. If there is one near you, I highly recommend checking it out. They often have gluten free spaghetti and elbows for 99 cents or less. I do think that over time I will get closer to gluten free but I am very grateful that my body can eat glutenous foods without sending me to the hospital. I have learned that over time the human body is unable to break down gluten rich foods, this is why much more individuals  have celiac disease. Over the course of a few decades the cases of celiac has more than quadrupled.  I hope that this article might cause others to reevaluate their diet and see if gluten is causing more harm than they think.

A Changing Environment and the Increasing Prevalence of Celiac Disease

Dr. FAQ: Stefano Guandalini on the Rise of Celiac Disease