What’s In A Name | How I Became Mr. Joshua Awesome

For my birthday I decided I wanted to change pace and write a fun article. Here is my story as to how the heck I got my name. 🙂

Like most things in my life, my name was not planned. I was born on March 12, Joshua Daniel Meckel. I never felt connected to this name, but I would not realize how much it did not feel like it was me until my name was changed many years into my life. So how did I become Mr. Joshua Awesome? Well, it is a fun story.

On October 25, 2018, I was driving back from Portland to Seattle. On this adventure with a woman I had only known for about 2 months, we had started a romance. We spent 4 days in Portland and had a truly wonderful time. In the car, about midway between the two cities, I was listening to Death Cab For Cutie’s “I will follow you into the dark”. This has been one of my all time favorite love songs and on this day it was instrumental for changing my life forever.

As I was listening to it and holding the hand of this new woman in my life, tears began to roll down my cheeks. This was odd because it had never happened before in my life as far as I can remember. Since I was 12, crying had been a challenge. I recall going years without any tears. And on this fateful day, tears were streaming. As the song hit the 3rd chorus, I felt like I was getting a vision of my future with this woman next to me. The song finished and in a flash of a moment, I turned to her and asked “ Will you marry me”?

I simply could not believe this was happening because just 20 minutes before this moment, we had talked about marriage in depth. I had shared that I truly did not believe in marriage and I had vowed to never get married. I simply do not feel our modern system of marriage is a healthy one because of its real origin. People often believe it is something about love but the tradition of marriage in our modern times came from the intent of keeping women out of prostitution and living on the streets. I do not believe this is a healthy reason to create a legal bond with another. As many of you know, I am a HUGE romantic. I LOVE romance and LOVE in general. I actually used to be a wedding DJ and I jump at any chance to go to a wedding.

So now I am sitting in the car, going 70 mph driving to Seattle and I have now proposed to the first woman of my life. In that moment, I knew 1000% that this was what I was supposed to do. I am still learning the lessons from this decision and I am truly grateful for all that happened. This woman next to me looked at me and eagerly accepted the proposal. I remember we shot a video a few moments afterwards and we were in the deepest bliss. 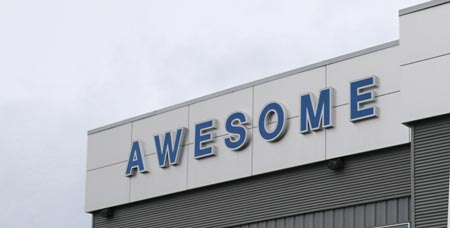 So what is up with the name??? Well, moments after this, I saw in the sky AWESOME. I shrieked, “DOES THAT SAY AWESOME!??!” I recall saying it a few times before it sunk in. I could not believe my eyes. It was the name of the Ford dealership in Chehalis, WA. I was in total shock of this word in front of me. I recall it was surrounded by clouds or at least that is how I remember it. I turned once again to my now fiance and asked her, “Do you want to be Ms. Awesome???” She once again said yes with excitement.

I had always believed that if I did get married, that the two of us would create a new name together for our new life. I had never imagined it would be a word such as this. The word awesome is heavy and it is a monumental weight to bear. I did not think of any of the side effects of doing something as this. When you have this name, you have to push in life harder than ever before.

This is one of the main reasons I have kept the name even though my marriage is no more. The name pushes me to become an even better being. I simply cannot sit on the couch and be lazy with my name. Every day I  have to work hard to become the name and evoke awe in myself and in others. This name has shared with me many beautiful gifts and challenges and I keep loving what the universe has provided me. I am so excited for what still lies ahead.