Hi, my name is Joshua Awesome(the story behind my name), I am a plant-powered philanthropist, writer, trauma healing support, & health advocate. I spends most of my time helping organizations & individuals thrive through my variety of web, marketing, business strategy and IT related skills.  I live in Spokane, WA with my 2 cats. My journey to veganism, saving animals and healing the world began more than 20 years ago when I was 12.  One day when I was going through the drive-through at Burger King I started to eat the Whopper and I told my mother that this was the last Whopper I was ever going to eat. And it was. After that day I quit eating animals and I never looked back. It took me another 19 years to actually go vegan though. My entire journey into health is detailed here.

I am a plant-powered philanthropist & health advocate . I live in Spokane, WA with my 2 cats.

I am not quite sure what exactly took me so long to fully remove the blinders that our society puts on us but it took me an unusually long time. I was very content with my cheese and milk. I put cheese on everything I ate. I have always been in the healthy range but I was not really healthy. In 2013 a girlfriend of the time started watching Earthlings and she was bawling due to the graphic scenes. I could feel her pain of these images. We decided that night to become vegan, although I was more nervous than she was. Like most vegans I do believe it was the best decision of my entire life and I only wish I had done it sooner. Giving me veganism was the greatest gift that girlfriend could have ever given me.

Once I went vegan I realized that there was not much community in my town. We had a great vegan bakery/lounge named Boot’s and there would be semi regular potlucks at peoples houses every few months, but that was it. With the help of a few people we formed INVEG: Inland Northwest Vegans. The initial goal of INVEG was to put on potlucks and have a booth at the Earth Day celebration.

One of the initial members of INVEG was adamant about doing a VegFest. I had visited Seattle’s VegFest and I knew that it would be a lot of work and I felt it would be more work than it was worth. In the end, I agreed and we put on the first Spokane VegFest in June of 2014. It was an incredible undertaking. Beginning in 2017 I began to began helping other vegfests around the country and now help with more than 9 annually. 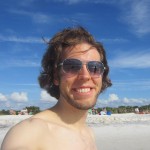 So later in 2015, I had even more big changes including leaving/loosing my long time corporate job. It was definitely a great gift in the end but also incredible challenging. I vow to never work for any corporations that do not align with my morals again in my life. I am doing my best to change the world and so any companies that I work for from this point on must have strong morals and treat their employees and the planet well.

I spent 5 years as an IT director of a medium sized e-Commerce website. In the beginning, I was the 2nd employee at the company and we were in the home office above the owners garage. Over the course of the 5 years I helped grow it 50% year over year in sales each of the 5 years. In 2015, I was fired for being vegan which pushed me into another life transformation. Instead of taking one of the very lucrative jobs that were offered to me, I decided to cut my expenses by 2/3rds so I could give of my time more.  Four months after I was fired I as offered a job that was starting just shy of 6-figures with promises of quick raises. It took me 3 days of heavy deliberation to be able to turn down a job. I spent the weekend dreaming of driving a new Telsa with auto pilot to the job, but I learned over the 5 years that each time I received a raise and increased my salary, a little part of my soul disappeared. Over the 5 years I went from a very happy individual to someone who was pretty miserable, even though I did give so much to my own non-profit, INVeg and Spokane VegFest. I also knew that if I took a job from another company, I would not be able to help nearly as many people and organizations. My former job was wonderful because through it I was able to teach myself so many amazing IT/Web related skills that are incredibly valuable and I now have the opportunity to use for good instead of evil. That is why I live very minimally in my new life.

Today, I live to help motivate others to heal themselves and the planet. I realized that most things that many people do for fun such as watching tv and play video games is less exciting than helping others and giving of my time so I gave up most of my childish ways. I now spend the majority of my helping vegan organizations(athletes, cookbook authors, VegFests around North America, food companies and animal sanctuaries) grow, coaching/mentoring others on the plant-powered living, while maintaining my duties in INVEG and taking off 3 months a year to put on Spokane VegFest.  I have never charge for any of my health related services and I spend 60% or more of my time working on my philanthropic pro-bono Loving Cooperative projects. My long term dream is to be able to to subsidize my life expenses so I can put all of my time and energy into saving the planet through my non-profit endeavors but for now I giving as much as I can.

Aging: I do not believe in aging. Every cell in our body is replaced every 7 years, so why do we age and why do some age much faster than others? I believe age is a state of mind and so when I was about 18 I decided I would hit 25 and than stick with it. I have done my best to keep with that goal. The age of 25 was chosen for semi silly reason of that when you are 25 you have the supposedly lowest insurance rates possible for a car and you can rent a car too. Originally, I would say “I am 25 for life”, clearly saying I have been on the planet a few more years but 25 in spirit. A few years ago I simply starting replying age-free instead of any specific number. Saying a number could confuse some people and I really don’t believe in being dishonest. Over my life I have met countless people who look and act 20-40 years younger than they really are on their drivers license. I always enjoy the conversations I get with people on this subject. I do not do it for anyone but myself but I do believe that over time I will help motivate others to decide to stop following the standard path of aging. 🙂 I never share my age but if someone wants to read my license I have no problem with it. I just do not want them to tell me the age it says. 🙂 I was born on March 12, some year 🙂

Green Smoothies are the elixir of life! Since July 4th 2015, I have been drinking them daily. I have become so dedicated to their benefits that I even travel with my full size Vitamix or bring frozen smoothies in my suitcase. I have to thank one of my idols, Rich Roll, for my passion for green smoothies. He regularly mentions their benefits on his show and after listening to it for 7 months I finally tried it out for myself. You can find my recipe and more about my journey into health here.